On Friday, July 22, Anson Mount sat on a panel at San Diego Comic-Con to discuss content from Star Trek: Strange New Worlds that is being added to the game Star Trek: Fleet Command. 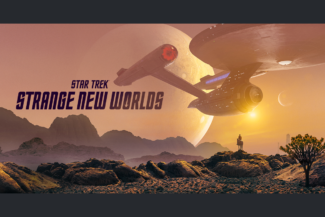 Talking about how it was “a dream come true” to become the Captain of the USS Enterprise, he said:

“It’s just amazing to be able to do a job where every day you say to yourself, “I can’t believe I get to do this.” And getting to meet this amazing family that is the Star Trek fanbase is the highlight of it.”

Discussing what interested him about Captain Pike, he said this:

“This is a very broad way of putting it but if Kirk represented machismo and Picard represented intellect, I want Pike to represent the heart. And I really think that decision in the second season of Discovery to make Pike aware of his future was a very smart one. Because it took what is a tragic ending and turned it into an active choice. And the repercussions and the fallout from that choice really helped put more pins into who this guy really was.”

And in reference to the SNW season 1 finale, he said this:

“In that last episode of season 1 when old Pike shows up and shows him, he never says “You don’t have a choice.” He still has a choice, but when he realizes what those choices are, there really is no choice… So, I feel like in that sense, having got past that now, the fully pledged Pike, the whole self-accepting Pike is really starting. And I hope we get to deliver the third act of Pike and find a unique way of overlapping with TOS. One thing I was thinking about making that finale is how many stories with people who have been given a terminal diagnosis who will tell you, ‘I have never been more alive.’ Because suddenly, all the crap you thought that mattered doesn’t. And I thought it put him in that space.”

David Eckelberry from Scopely, the publisher of Star Trek: Fleet Command joked that they had to create a whole new physics engine for the game just for Captain Pike’s hair.

The full article with photos is on the TrekMovie website, linked below. 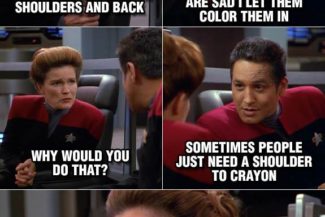