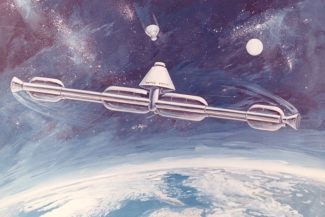 Artificial gravity, surely only a thing from Star Trek and other space themed series, films and literature, right? Well, you would be surprised to know that we can simulate gravity in reality too… but how does this work you may ask…

Well to start, let’s do a quick recap on what we know about gravity. Discovered by Isaac Newton and examined in his Law of Universal Gravity; Newton analysed the relationship between the Moon and objects on Earth to determine that gravimetric forces were responsible for changes in behaviour of these objects. The distance an object is from one another and their masses all play into part of how gravity works.

Take an apple for example, its mass is extremely smaller than the Earth’s mass, so the force acting between the apple and the Earth is very much in favour of the Earth’s. If the apple falls from a tree, it will fall quite quickly towards the Earth’s centre, because Earth’s mass is extremely larger than the apple’s. But mass is not the only consideration; if the apple was in space and a very long distance away from Earth, it would not be pulled towards Earth centre as quickly. This is because distance also affects how strong gravity acts on objects.

So that’s gravity; an invisible force from every object that draws objects together. It’s main two actors are distance between the objects and their total mass.

What is artificial gravity, and how do we use it in reality?

Artificial gravity could be described as the creation of an inertial force that mimics the effects of a gravitational force. It’s important to note here that we are mimicking the effects of gravity, rather than actually generating it. So that we can take advantage of its effects.

Gary Jordan from NASA’s “Houston we have a Podcast” podcast notes, “Everybody thinks there’s a room that you can just kind of flip a switch, but it’s a little more complicated than that.”

One of the most popular ways to simulate gravity was one conceptualised by Konstantin Tsiolkovsky, often referred to as the Father of the Russian space program. He had the idea of a rotating vehicle in space that simulates gravity, using centrifugal force.

Now a huge rotating vehicle has logistical problems due to the complexity and upkeep.

Therefore, in 2005, Kent Joosten submitted an idea to create a vehicle that looked like a very long rotating stick, with a nuclear reactor on one end of the stick and the habitation module on the other. As this spins the centrifugal force would create gravity on both ends of the stick. As you move towards the centre of the stick, the effects of the artificial gravity would wear thin. This was conceived as a cost-effective way to generate artificial gravity.

Dr. Bill Paloski explains further the equation for centrifugal force as ω2r; angular velocity squared times the radius. And so, when the person is at the centre of rotation, r is zero. So, the gravitational loading is zero. And the farther you get away, the higher the loading is.

An example of a centrifuge here on earth would be like the laboratory centrifuges you see separating fluids in test tubes, or think of a carousel in a theme park. Even though these items have different purposes than to create artificial gravity, they all demonstrate centrifugal force in action.

An example of this design was recently used in Netflix’s new film, Stowaway. I would highly recommend the film as an excellent example of this theory in motion. Here’s some commentary on it.

How does it work in Star Trek?

But having a ship rotating like that wouldn’t look as aesthetically pleasing as, say the USS Enterprise, with her various sleek designs. Let’s take a look at how Star Trek deals with artificial gravity.

In Star Trek, artificial gravity on ships and stations is generated from an elaborate net of “Gravity-Plating” known as the “Artificial Gravity Grid.”

The floors of ships and stations are embedded with Gravity-Plating that simulates the gravity. In 2269, the Enterprise discovered technology inside a Slaver’s stasis box. They found a ‘Flying Belt’ which was the basis of generating artificial gravity fields. The technology helped the Federation develop the artificial gravity systems that is now used in all ships and stations.

There is also the Artificial Gravity Generator responsible for using the Gravity-Plating to change the environment from zero gravity to artificial gravity.

Inside the generator are Graviton Stabilizers. These control and vary the level of gravity. Meaning that the level of artificial gravity can be increased or decreased in any area of the ship or station.

Most notably, Shuttle bays were known as “variable gravity areas”, as this was one of the frequent places where the artificial gravity was varied to perform tasks that required it. Damage to this system can have dangerous effects on the safety of a vessel and station, along with its inhabitants.

Although, so far, it’s not been made clear in canon as to how the science of artificial gravity works.

So perhaps we will one day come across some ancient alien technology, substances, elements or even learn a way to generate artificial gravity from a visiting alien race? Well until that happens, we will need to rely on the genius of our scientists around the world and our rotating ships.