Who is Elim Garak? 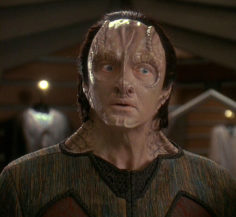 A former top agent in the Obsidian Order (the Cardassian intelligence organisation), Elim Garak ended up in exile on Deep Space 9, where he ran a tailor’s shop. Garak was the son and protégé of the former leader of the agency, Enabran Tain, and was highly skilled in the art of deception. All his life, he had been forced to hide his relationship with his father so it would not weaken Tain’s standing in the Order. It was only on Tain’s deathbed that he finally acknowledged his son.

It is difficult to quantify Garak’s career in espionage because he is so talented at covering up evidence of his work. But, he is likely to have been responsible for a number of killings, particularly high-ranking Romulans during his time working as a gardener in the Cardassian Embassy on planet Romulus.

Following the Cardassian withdrawal from the planet Bajor, Garak was exiled to Deep Space 9 where he set up Garak’s Clothiers. But his espionage skills were not redundant and proved useful when he arranged an assasination to help the Federation draw the Romulans into the Dominion War.

While on the station, Garak formed a tentative friendship with several residents, including the genetically enhanced Dr. Julian Bashir, who once had his own dreams of what it meant to be a spy. But Garak’s most notable relationship was with Tora Ziyal, the half-Bajoran daughter of his bitter enemy Gul Dukat. Garak never quite understood what the open and innocent young woman saw in him, but he regretfully never had the chance to find out as she was killed in the Dominion War.