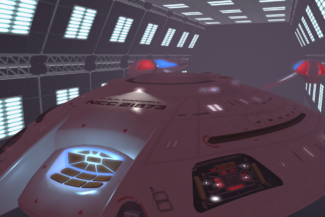 The USS Maxwell turned seven years old today. The Nova-class starship was reactivated from the Pinastri Bone Yard on stardate 150215 and launched on 150223 under the command of Rear Admiral Nora Gerhadsen and her XO, Captain Jayce RebelV. The ship has received the ‘Ship of the Line of the Year’ award for 2016 and 2017, ‘Ship of the Line Recognition of Excellence’ twice, ‘Outstanding Ship of the Line Award’ twice and a ‘UFS Meritorious Unit Commendation’ in 2017. I spoke with Executive Officer Captain Jayce RebelV on the ship’s activities so far, and for a short look into their future.

What makes the Maxwell stand out from other ships in the Fleet?

Captain RebelV calls on the importance of family: “Her crew of course. We are a bunch of oddballs – I guess that can be said for most of the ships in UFS – but more importantly, we’re a family.”

What do you owe to your longevity and success?

RebelV was quick to identify the perfect recipe for success this included: “An imaginative Commanding Officer,” mixing in “great RPers in the crew” and finally just a dash of “a lot of alcohol.. Of course we all know they meant synthehol… right?

What has been your favourite experience this year on the ship?

RebelV referred to the ship’s yearly tradition at Christmas: “Our Christmas get together, where we reflect on the old, the missing and the new.”

What does the next year aboard the ship look like?

RebelV mentioned that we can expect to see the Maxwell share more great stories, focusing on “adventure” and “great RPing.” But most of all they are looking forward to the time they get to spend with each other.

What would you say of the crew?

RebelV reiterated: “We aren’t a crew, we’re family along with everything that comes with it. We are dysfunctional but we work well together.” And we’re sure that it’s that dysfunctionality that makes the crew’s interactions with one another that much better.

Have you had any challenges?

RebelV acknowledged that real life can sometimes get in the way, as it can for all of us. They said: “when [Real Life] lays you a low blow and having to juggle that with being the [Executive Officer].” They also mentioned that this can be a challenge when also trying to “herd the cats, so to speak.” 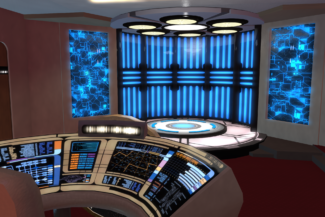 Is there anything else you’d like to add about your experiences on the Maxwell?

RebelV finished by adding that the crew works together like a “cohesive whole” and that they all get along well.

We’re excited to see what the next year of service brings for the USS Maxwell. If you’re interested in paying them a visit head to this Second Life Landmark to see the spectacular ship for yourself. The Maxwell conducts weekly roleplays on Mondays at 5:00 pm (1700 hours) Pacific.