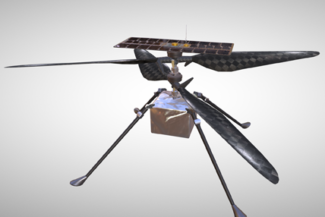 Who said helicopters were just for us Terrans on Earth? Well since the launch of NASA’s Ingenuity mission, Martians can ride helicopter style too! As long as they’re tiny and don’t weigh much that is.

Why is there a helicopter on Mars and why did I not get a ticket to ride, you may ask. Well you might struggle to sit down for one; it’s only 0.5m in height and has a rotor span of 1.2m! NASA launched its Ingenuity helicopter along with the Perseverance Rover in July 2020, and it finally landed successfully on Mars in February of this year.

NASA’s Jet Propulsion Laboratory is responsible for the mission. Its goal was to put a remote-controlled flight device on Mars and test the limits of the challenging atmospheric conditions on the planet. Mars’ atmosphere is 99% less dense than Earth’s, which creates unique challenges for this type of aircraft to take flight. To put this into perspective, standard Earth passenger helicopters operate at around 450-500 rpm, that’s a fifth of what Ingenuity needs! For NASA, Ingenuity has always been about testing; it is a high-risk, high-reward approach to testing the limits of aircraft engineering on Mars.

Although it’s safely on the surface of Mars right now, its first scheduled flight attempt has been unfortunately postponed until it receives urgent software updates. NASA’s engineers are hard at work to get ready to complete the historic flight! It’s definitely one small step but the data gathered here could result in countless aerial applications on Mars to aid in future missions, and perhaps one day colonisation efforts.

And it’s off! From it’s ‘blue sky’ feasibility study six years ago, to its first flight, the Ingenuity was officially launched from Mars’ surface in the early hours of the morning on April 19th, 2021

Chief Pilot of the Ingenuity, Håvard Grip confirmed: “Ingenuity has performed its first flight, the first flight of a powered aircraft on another planet!” It wasn’t in the thin atmosphere for long, but it successfully managed to complete its scheduled 40 seconds of flight by lifting off, raising 10 feet and then descending back down.

Lucky for you, it’s guardian and companion, the Perseverance Rover, was able to capture video of the historic moment which you can watch right here: https://www.youtube.com/watch?v=wMnOo2zcjXA

In honour of the historic moment, NASA Associate Administrator for Science, Thomas Zurbuchen, announced the Martian airfield site would be dedicated to the two brothers who championed early aerial flight on Earth, Wilbur and Orville Wright; it will be known as Wright Brothers Field.

This is a huge step forward for aerial excursions on Mars and will hopefully lead to more extensive and advanced technology in the future!