In 2022, tests of a non-traditional rocket engine were conducted at the Marshall Space Flight Center in Huntsville, Alabama. The engine, called a Rotating Detonation Rocket Engine, is predicted to be 25% more efficient than today’s rocket engines, producing more power while using less fuel and requiring fewer components. The hardware used in the test, which was 3D printed, operated more than a dozen times for a period of almost 10 minutes. At full power, the engine produced more than 4000 pounds of thrust for almost one minute at an average chamber pressure of 622 pounds per square inch. That’s the highest pressure ever recorded for this design. 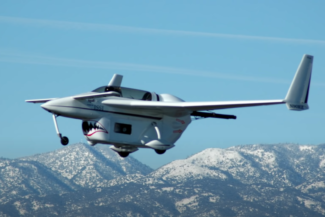 A detonation is a combustion process where the flame front moves faster than the speed of sound in the material that is burning. A set of four pulse detonation engines were flown on a test aircraft in 2008 (see picture at right). Each engine pulsed at 20 times per second. These pulse engines, however, cycle on and off and do not produce a constant thrust. A somewhat technical explanation of the detonation process is here.

In the 1950s through 1970s, Professor Arthur Nicholls at the University of Michigan College of Engineering was very active in detonation physics. He was one of the first developers of rotating detonation engines. The US Air Force and US Navy are building and testing prototypes. A team at the University of Central Florida, working with the Air Force, built an engine in 2020 that produced 200 pounds of thrust successfully and sustained that thrust until the fuel was cut off, something that was previously thought to be impossible.

Rotating detonation engines have been pure theory until recently. Now it appears that they are ready to move from the drawing board to the launch pad, reducing the cost of sending payloads into space, possibly just in time to be included in a future mission to Mars. These are truly exciting times!

The United Federation Starfleet Blog is written by Fleet Captain Hal Jordan and is published every Friday. Join in the discussion! Engage with us on Discord at: discord.io/ufstarfleet

One of HBO's newest series is The Last of Us. It involves a worldwide fungal infection that becomes a global…

ChatGPT is a pre-trained language model developed by OpenAI. It is based on the GPT (Generative Pre-trained Transformer) architecture and…

NASA has big plans for the new year, and they have released

The "Bernard Kutter Low-Earth Orbit Flight Test of an Inflatable Decelerator" (LOFTID), was a NASA demonstration of what's called a…

by Kassie Quandrii “Is there life beyond Earth?” is one of the most fundamental and far-reaching questions we can ask.…