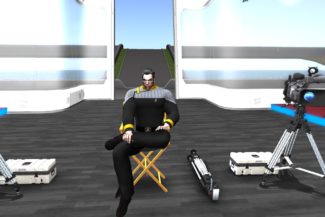 Q: You are the producer for the United Federation Starfleet YouTube talk show, called “Subspace Relay.” Are there plans to have new episodes on any kind of release schedule, or just whenever you can put them together?
A: The goal is to put out two a month. As time goes by and we get into a rhythm, we may increase that. That mostly depends on our guests’ schedule more than our own.

Q: What kinds of topics do you plan to cover in these episodes?
A: All kinds of topics related to UFS. This show is meant to give out information as to what we’re doing within our own sims, and on the grid as a whole, in a fun and entertaining way. Our newest episode features Fleet Captain Lizzy Austen ((Gracemount)) & Vice Admiral Kermie Mistwallow, discussing Relay For Life in Second Life.

Q: Since most of us are computer geeks anyway, please tell us what software you use to produce the video, special effects, and music.
A: To record, I use OBS Studio. To edit the footage, I use Movavi film editor. Both of these programs are free. For music, I just searched for royalty free music on Youtube.

Q: About how long does it take you to produce one episode?
A: To record, it takes us about a half hour, we get as much as we can in one take. That’s why you hear pauses and word stumbling and whatnot. It gives the show that “real” feel. Like it’s just a couple of people sitting around chatting. To edit can take anywhere from a couple of hours to four or five, depending on what I need to do to the shot. I try and keep as much of the view as I can.

Q: Did you learn any valuable lessons from producing the first two episodes that will help you with subsequent episodes?
A: Yes! Remember to turn off a few things before you begin recording — like Lookat and region notifications. In fact, all notifications altogether. That way, nothing’s popping up on your screen that you have to edit out later.

Q: Is there anything else you would like to add?
A: If you would like to be a guest on this show, all you need is a microphone, a topic of discussion, and an SL avatar. Later as we get more and more confident with having guests, the option of needing an SL avatar will go away and we’ll do a “guest” call.

Episode Two of UFS “Subspace Relay” is now available on Youtube! Link to this LCARS: https://youtu.be/ebEuZ7ic-Gs