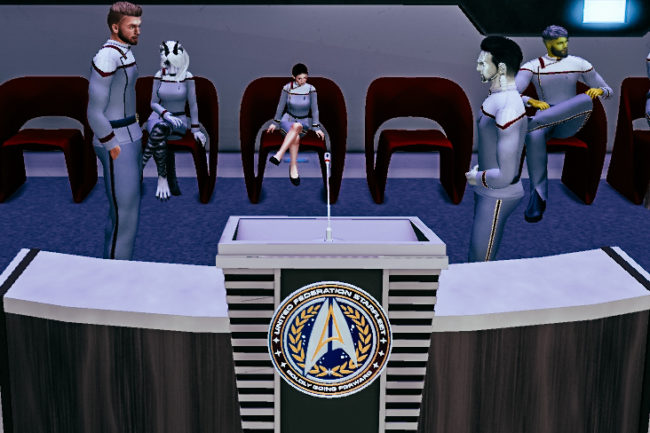 The Hestia Class starship, USS Atlas, was officially launched on stardate 220828, under the command of Captain Drewski Northman, with Lieutenant Commander Siobhan Crystal taking the position of Executive Officer. This reporter caught up with the Captain this past week. He was kind enough to answer a few questions about the newest UF Starfleet ‘ship of the line.’

When do you meet?
We meet on Mondays at 5pm SLT for our main mission time that advances our overall story. One thing that is unique about us is that we carry on a tradition started by Admiral Nora Gerhadsen on the USS Maxwell: The Atlas never closes. What this means is rain or shine, holiday or regular Monday, we will always have something going on. Somebody will always be there to organize something. For some people, this ship and group might be all they have on a holiday, and we want to be there for them. Another note is that I want to encourage our crew that they are always welcome to be on the ship at any time using the facilities to tell smaller stories (engineering doing repairs, performing experiments in the lab, Operations doing power system diagnostics etc.)

What is the mission of your ship?
Our mission is broadly a long range mission of exploration and scientific discovery, to boldly go to the fringes of the frontier. Specifically, the USS Atlas’ first long term mission is to retrace the steps of a potential lost colony of Rajans. For those of you that don’t know, the Rajan civilization was on Pinastri before we settled the planet. They mysteriously died out about 10,000 years ago. The USS Maxwell found that their original home planet was hundreds of lightyears away in the Hapke Cluster. Recently, our crew discovered more Rajan ruins deep under the new colony location on Pinastri. This was an observatory of sorts that displayed information on what appeared to be a separate group that migrated in a different direction from their original home planet upon its destruction. Our goal is to trace that second group’s migration and perhaps find a surviving colony of Rajans. Our mission will take us to the far corners of the Delta Quadrant.

What is the culture like?
I would say the culture on our ship is very much a family. We’re all a bit quirky. Many of the crew crack wise enough to make Joss Whedon proud. The most endearing thing about this crew to me is that atmosphere of being a family. I am privileged to carry on the task of keeping this family together and going strong that Nora started almost 8 years ago.

What is unique about your ship?
The Atlas is only the second 25th Century designed ship that has made it out to the Pinastri Colony. The Hestia class (an upgrade to the Prometheus class starship) is sleek, well armed, and fast. The Atlas is an exploration variant on the standard Hestia class design. That means she lost a couple phaser arrays and carries slightly less torpedoes than standard, but she has a full deck of state of the art labs, and we took inspiration from the Maxwell’s experimental long range sensor suite when adding ours. Probably the most unique aspect of the ship is the Multi Vector Assault Mode capability. She was constructed in 3 segments that fit together under normal operations, but when MVAM is executed, they separate into smaller, more agile ships. This comes in handy when we are far from home and reinforcements.

What should a new officer expect riding along or joining?
We are always happy to take new recruits on ride along! If you would like to see what we are all about, please contact myself or our Executive Officer Siobhan Crystal to make arrangements. If after a ride along, a potential new recruit likes us, and we like them, that usually leads to an invitation to join the crew.

How can a new officer contribute?
This is a question that depends a lot on the situation and the recruit. Our mission will lead to a variety of encounters both on ship and on planets, so your contribution may vary. Your best bet as a new recruit is to work with the department head in your particular branch and jump in both feet first into adventure.

What opportunities are currently available?
We currently have openings in several areas: Engineering, Security, and new-to-us…Intelligence (we are looking for 1-2 Intel officers at most). I would love to see 3-4 people in each department. This will provide opportunities for smaller pick-up duties and stories that people can tell together. Stay tuned to our section on the forum for up to date information on openings and duties that can be performed during the week.

At the Launch Ceremony, the past exploits of the USS Maxwell were also lauded, with many thanks to outgoing Commanding Officer Rear Admiral Nora Gerhadsen and her long-time Executive Officer, Captain Jayce Rebel.

Vice Admiral Kermie Mistwallow, Deputy Commander-in-Chief of UF Starfleet, had this to say: “The USS Maxwell will forever be known as a legend within UFS. While that may make Nora squirm, the fact that it has been so successful, it will remain as a ship, it will remain active (as an NPC) and will still be used for people to say “What the eff a singularity core.” Nora, thank you for your continued service to UF Starfleet, thank you for all you have done for the Ship, the crew …. nay the family, that you have nurtured to be fine officers and representatives of UF Starfleet. As Deputy Commander, UF Starfleet, and on behalf of the Commander-in-Chief, it is my honor to present Rear Admiral Nora Gerhadsen the Christopher Pike Medal of Valor for exceptional leadership.”

About the USS Atlas: “Drew has always had the dedication, drive and determination to succeed. From offering suggestions, constructive feedback to volunteering his time to make UFS as good as it can be within his power and ability. You make me very proud, you continue to grow, you always have a positive attitude, and I know the USS Atlas will do more than succeed under your command. With that I offer a hearty Fair Winds and Godspeed to the USS Atlas, its crew and its journey ahead.”

From Rear Admiral Nora Gerhadsen: “On my homeworld, we have an expression: ‘An Teoratha.’ It is a declaration: ‘to the Cause,’ or ‘to the Truth,’ or even ‘to the Quest.’ It is a mixture of all these ideas. To pledge oneself to the Cause, the Truth, and the Quest, one says ‘ha mi cymran an Teorath.’ Maker’s blessings upon USS Atlas, and all who will serve with her. May your voyages last many years! May you make great discoveries and meet many new species and new worlds. You are embarking upon the highest calling to which any of us can aspire: to explore the final frontier, expanding our knowledge of the Universe. I wish you all the best. I am sure you will do us proud. An Teoratha!”

The United Federation Starfleet News Blog is written by our members and is published weekly. Join in the discussion! Engage with us on Discord at: discord.io/ufstarfleet